If you’re struggling with premature ejaculation, it can be tempting to turn to natural remedies to find a cure. After all, why would you bother with those numbing sprays and pills, when you can just eat a boatload of carrots instead?

In this article, we look at some popular natural remedies for PE and investigate what actually works.

Carrots are rich in antioxidants and beta carotene, both of which are claimed to improve blood flow to the genitals during intercourse. To try this remedy, take half a cup of grated carrots, one egg yolk and a teaspoon of fenugreek, blend together and consume the mixture every night before bed for at least three months.

Asparagus contains high amounts of Vitamin A, which is essential for regulating testosterone. It’s also rich in Vitamin C, which is believed to increase sperm count and improve blood pressure in your penis. To give this a try, it’s recommended that you take two teaspoons of powdered asparagus and one cup of milk, mix together and boil over the stove for 15 mins. Strain off that mixture and drink three times a day.

MORE: What do women really care about in bed? We asked, they answered.

Ginger and honey are both believed to be aphrodisiacs, and when combined, it’s claimed that they can increase libido and improve performance. Grate a tablespoon of ginger, combine with honey, and eat that mixture every day until you notice a difference.

Watermelons contain a phytonutrient known as citrulline, which is believed by some to increase libido. To give this remedy a try, simply cut the watermelon into small pieces and sprinkle it with some powdered ginger and salt. Eat it alone, or mix into a fruit salad.

Do any of these natural remedies actually work?

Most of these remedies are based on Ayurvedic medicine, which is an ancient Hindu vitalist system that aims to balance your different ‘life forces’ — similar to the old European theory of ‘humors’.

Credible scientific validation is pretty light on the ground for these methods, and The National Center for Complementary and Integrative Health cautions that, “there aren’t enough well-controlled clinical trials and systematic research reviews — the gold standard for Western medical research — to prove that the (Ayurvedic) approaches are beneficial.”

The occasional ginger and honey mixture or watermelon sprinkled with ginger won’t do you any harm, but when it comes to your penis, why mess around? Also, who wants to actually drink asparagus and milk juice? Not us here at prolongdevice.com

A remedy that works

It’s understandable that you would want to avoid the numbing sprays or suspicious-looking penis pills that are out there, and the good news is there is another way: control training.

No pills, sprays or creams required, the Prolong Climax Control Trainer is the only FDA cleared device that helps prevent and manage PE. Simply train for 30 minutes, 3 times a week for 6 weeks. Here’s what the clinical studies show: Men who used the device and control training program showed improved time to ejaculation from week one.

By the end of week six, each participant showed improved sexual satisfaction, improved sexual functioning and a reduction in anxiety symptoms. People in relationships felt they communicated better and enjoyed better sexual performance.

So, consider your options. You could try mixing grated carrot and egg together for three months in the hopes of something changing, or you could take back control right now. No weird chemicals, backed up by science and cleared by the FDA? It’s a win-win. Try Prolong today.

Sexting: Not Just For Teens

What Does She Really Care About In Bed?

Adult Role Play: How To Get Involved

How To Regain Your Sexual Confidence 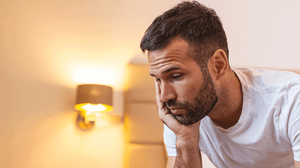 Feeling Down About PE? Find Out What To Do Here